Top 20 Karaoke Songs of All Time!

Throughout the world; lots of people do karaoke. Some songs are more popular than others, making it on to several Top Karaoke Songs Lists. This list features the Top 20 Karaoke Songs of All Time worldwide! Some of these songs also feature on our best karaoke songs list whereas others are on the truly cringe worthy Top 10!

Regulars that attend karaoke bars and clubs do so because they simply love the activity, whereas others find themselves up on stage because they are drunk, were dared to have a go or some other perfectly valid reason.

Regardless of why and how you ended up singing your heart out at karaoke—here’s our list of the Top 20 Karaoke Songs of All Time! (aka: most popular song choices in the history of karaoke)!

This Bon Jovi classic is very popular with several drunk guys doing their best Axel Rose impersonation by screaming into the mic. Oddly enough, this one is one of the easier Bon Jovi songs to sing (musically) especially when fueled by lots of Jack Daniels!

Hopefully the singer choosing this song has one of those "once-in-a-generation" voices— but usually that is not the case with many a karaoke newbie attempting to match Whitney’s amazing vocal abilities. It’s the longest four minutes and forty-five seconds of their life!

Although a very popular choice, it’s a difficult one to pull off well and don’t try it solo! It’s best to sing this song (or any Beatles song) with a few mates as the Fab Four vocal style is hard to duplicate well. Good luck!

This classic Elvis ballad is a favourite with older couples out celebrating— avoid the Elvis curled lip impersonation and just sing. Elvis songs are a very popular karaoke song choice and feature in many Top 20 Karaoke Songs Lists.

This song, along with other Frank Sinatra classics make it onto our top 20 karaoke songs list because if you learn it and sound half-decent; the dividends are huge! Why? The ladies will love you or at least talk to you-- confirming that a little bit of Ol' Blue Eyes magic works like a charm!

Undoubtedly a favourite tune, especially with drunk ladies. It comes with a warning label though— sing at your own risk as every drunk a$$hole in the venue will hit on you!

There’s usually a sure-fire bet going on among bar-staff as to who they think will attempt this song— although turns out sometimes there are exceptions!

Undeniably a premier Bachelorette party theme song— a performance fuelled by gallons of sweet tasting alcoholic liquid courage including any mix of wine, schnapps, beer or spirits! One rule only—  crank up the volume, add some attitude and let it rip! Celebratory, bachelorette or stag songs that create a fun, party atmosphere feature on lots of Top 20 karaoke song lists including this one!

Equal place getter for Bachelorette parties— Do it with plenty of sass! Be proud and loud Ladies!

Predictably, this is one of the most popular songs to ever be sung on Karaoke! Sing your heart out Ladies! 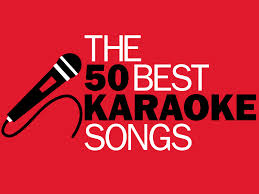 There is always that one-drunk tourist that thinks he can sing, is sexy and has killer dance moves! Let’s hope he can deliver!

Despite the scores of misquoted lyrical versions of this song; it is guaranteed to get the ladies drinking and up on the dance floor!

Excessive table banging may occur but a favourite all the same— and a run on the bar for shots afterwards is typical!

The classic is popular especially with older crowds and business men. To get the entire bar going; it’s best performed with a glass of scotch in hand, a loosened neck-tie and a notorious killer attitude!

Proudly brought to you by Jim Beam since nobody ever sings it sober! Guaranteed to start a bar-wide sing-a-long and unfortunately a bar-fight as well sometimes!

From Titanic is another of those infamous karaoke song choices that are best left alone— unless you can go from 0-60 in two notes like Celine can! But it is one of the best karaoke songs out there for a variety of reasons! (most memorable anyway)

This bubbly classic is undoubtedly the most popular duet— ever! It’s the go to song for dating couples as well as unsuspecting single guy and girl within a group night-out situation! Sing with caution as may lead to romantic consequences!

# 2 - The Greatest Love Of All: Whitney Houston

A huge vocal range is needed to pull this one off well— but typically the karaoke singer stares at the host with a panic-struck look when at the first chorus; as the realization of what’s about to come hits! Luckily there are equipment dials to fix the levels so it doesn’t sound too bad!

This classic is undoubtedly the most signed-up for song in karaoke history! Truly it is! So many people just love this soulful ballad and therefore give it a go. This one also features on other Top 20 Karaoke songs lists.

*Check out some of our other Top 20 Karaoke Song Lists!